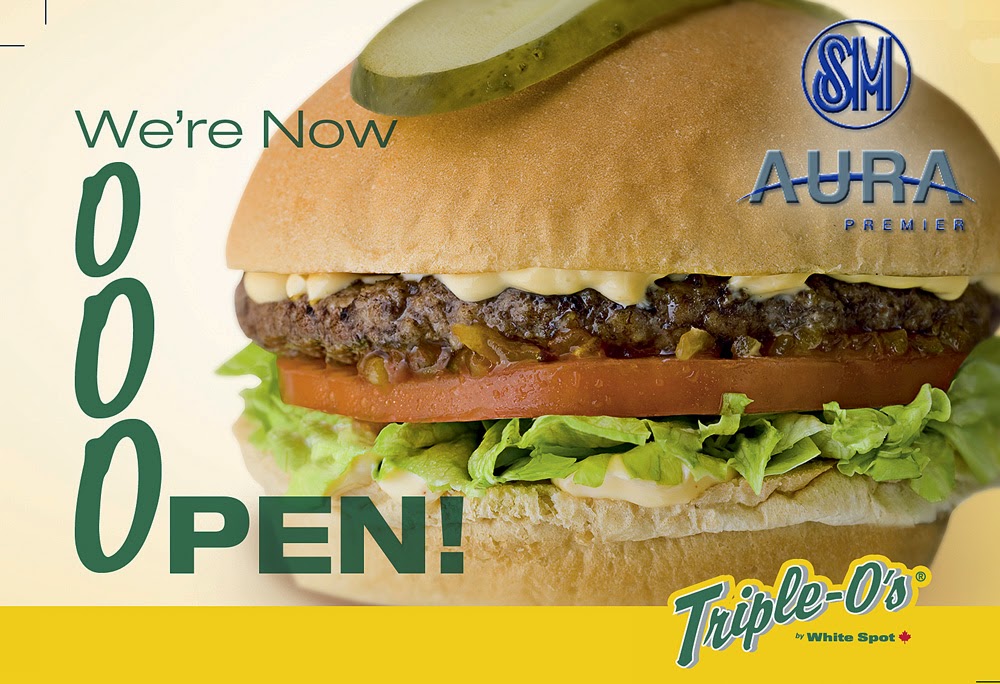 It has been four months since Triple O's launched its first restaurant at SM Megamall. For a starter I ordered their Bacon Cheddar burger (which is love at first bite)  it is big, tasty and fresh, their burgers will not dissapoint those who have big appetite.   For my friends living/working  near the Fort area, this favorite burger joint from Canada  opens its second branch at the fourth floor of SM Aura Premier.

For anyone who has been to Canada, Triple O’s by White Spot will be instantly recognizable, placing an ear-to-ear smile on their face.

Established by Nat Bailey in 1928 as Canada’s first drive in restaurant, Triple O’s took an uncompromising stance on quality and flavor, propelling the brand into the powerhouse that it is today. It can also be said that Triple O’s huge success is due in large part to the legendary Triple O’s burger, which continues to make waves among customers who simply can’t get enough.

Triple O’s proclamation of having the “sauciest, juiciest, tastiest, bestest burgers around,” may sound like a tagline, but the 100% Canadian beef patty that goes into every burger is a convincing reason to back up the dialogue. Alongside its inimitable burgers, Triple O’s likewise offers fish and chicken burgers, which are perfectly grilled to a crunchy, flavorful crisp, as well as a selection of other main courses, such as chicken, pasta, and fish dishes.

“In Manila, we have also become known as the place that serves the best milkshakes in town,” explained Pinky Yee, who was mainly responsible for bringing the brand to the Philippines. “Our hand-scooped Triple O’s milkshakes have developed quite a loyal following,” she further noted.